Submit a News Release
No Result
View All Result

by Press Room
in Press Release 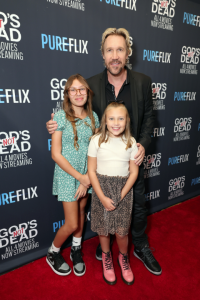 (EMAILWIRE.COM, September 16, 2022 ) Los Angeles, CA – The glitz and the glam were brought to the AMC cineplex in the Westfield Century City Mall on the eve of September 13th, as Pure Flix hosted a private screening to show appreciation for members and supporters of the Gods Not Dead film series.

The original film, which was released in 2014, told the story of Christian college student whose faith is challenged by an atheist philosophy professor, who declares God a pre-scientific fiction. The film grossed a staggering $62 million at the US box office on a budget of just $2 million. The special screening was for Gods Not Dead: We the People, starring David A. R. White, Antonio Sabato Jr., and William Foresythe.

We the People was released in 2021 and grossed $1.1 million in its special three-night-only engagement. The story portrays a group of parents, led by a local pastor, whose homeschooling methods are brought into question after an agent from social services makes an unexpected visit to one of their homes, and deems the educational setup inadequate. The case makes its way to Washington D.C. in defense of homeschooling, and to also prove, once and for all, that God is truly not dead!

Step and Repeat LA printed two 8H x 10W backdrops to serve as the evenings photo op for all those in attendance. The backdrops were printed on a matte-finished polyester blend fabric that eliminates the possibility of glare often seen in photos where flash photography was used. The setup was accompanied by movie posters printed on high quality gatorboard, and decked out with a plush 20 red carpet to add that legendary Hollywood touch!

Gods Not Dead: We the People and all three previous films in the series are currently available to view on the Pure Flix platform.

From movie premieres to private birthday parties, Step and Repeat LA has been creating backdrops for countless events for nearly 15 years. The company provides top-notch sales executives to handle every detail, a cutting-edge design team that can create custom-designed layouts, as well as in-house printing, production, and quality check. Delivery, setup and take-down services are also available and are done by Step and Repeat LAs experienced crew. And with 24 hour turnaround capability, its no wonder Step and Repeat LA has become The City of Angels premiere red carpet backdrop company!

No Result
View All Result